Imutest’s Gluten-in-Food Kit is a Gluten Flow-Through (GFT) kit which allows home users to detect the presence of low levels of cereal gluten in food raw materials, part-processed foods and many finished products.

Beer can also be tested with this kit. Gluten in beer is already solubilised. This means the extraction steps in the instructions (come with the test kit) can be skipped. Also, as there is no extraction step, the limit of detection will be lower than for solid foods (1-2ppm for beer rather than 10-20ppm for solid foods). This will give a very sensitive and accurate positive result even if there is only a tiny amount of gluten present.

The kit can be purchased here: Imutest Gluten-in-Food Kit (5 tests)

*** not required for testing beer

Below are some pictures of the kit (click on the thumbnails to enlarge). 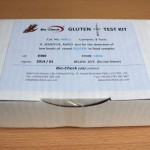 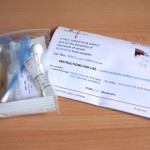 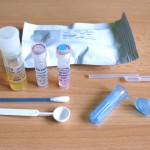 Important note: Between 2015 and 2016 Imutest changed the antibody in the kit from Skerritt to R5. That means test results of the same beer tested with different antibodies can return different results.

How to read the test result:

The appearance of a clearly visible, pink Test spot on the left of the test area ( T ) indicates the presence of gluten at a level of 10-20 ppm or more in food samples and 1-2 ppm or more in beer. The darker the test spot the more gluten is present in the sample being tested. More than 20 ppm but less than 100 ppm should give a Test spot that is weaker than or similar in intensity to that of the Control spot ( C ).

Each test kit is a quality assay included which helps to interpret the result. There the intensity is scaled from 1 (barely visible) to 20 (dark red) whereas the control spot is estimated 6/7 (light pink). This allows a rough estimation of the level of gluten in ppm. 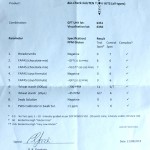 This is how a negative result looks like (taken from the Corona Gluten Test). There is absolutely nothing to see, so it’s a 0/20. 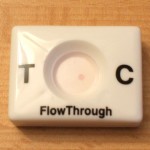 Here are two positive results. Very low positive on the left side from the Pabst Blue Ribbon Gluten Test, the spot is barely visible and I would estimate it a 2/20 which indicates a level below 20 ppm. Rather high positive the picture on the right from the Gambrinus Gluten Test post. I would rate it a 8 or 9/20 so it is very likely to have more than 100 ppm. 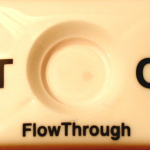 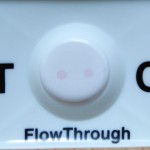 The procedure is the same but the intensity of the test spot can only be used to quantify the level of gluten on a very high level (weak or strong gluten). The new kit is marked with R5 to differentiate between the Skerritt and R5 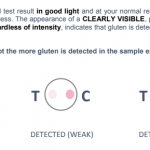 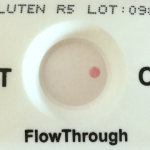