I spent my last holiday on the island of Crete. Crete is the biggest of the Greek islands and fifth largest in the Mediterranean Sea. As usual I take the chance to test some local beers. But Greece is very much influenced by Dutch breweries. You get Heineken, Amstel and other Dutch brands easily and also some local brands like Alfa are owned by Heineken. So I decided to first test Amstel as I was currious but don’t worry I also tested a Greek beer called Mythos and will post the result soon.

In my hotel a cheap mass-produced beer called ‘Cretan Beer’ was served which tasted horrible. The barrel though was labelled with ‘Heineken’ so it seems the god and the rubbish beer is produced in the same brewery and all its somehow Dutch. But the bottled Amstel tasted quite OK – crisp and refreshing, good carbonation. 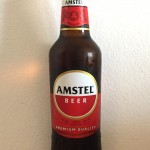 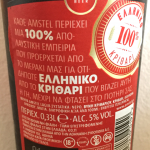 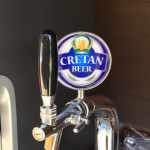 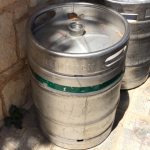 Test result: The test result is negative. According to the instructions there should appear a clearly visible pink test spot on the left of the test area ( T ) to indicate the presence of gluten. The pink spot on the right test area ( C ) is a control spot and indicates that the extract/sample is suitable, the test has been performed correctly and all reagents are active. Even though the detection limit in this kit is very low (1-2 ppm) and the test is negative please note this is not a medical advice – please see also my facts page. 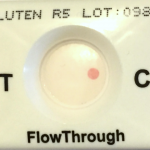