Beck’s is one of the most famous German premium beers. It is sold worldwide and the 6th best selling beer in Germany (see here the 2013 ranking, in German). It is one of my favourite beers but it is a bit expensive. This might also be one reason why Beck’s only ranks 14th amongst the most popular German beers according to a German TV station survey. See here the ranking -in German- but please note that this list contains all styles of beer including Altbier (sort of Ale), wheat beer etc.

Despite the high price Beck’s might be an option for people with Gluten Sensitivity according to the test result below: 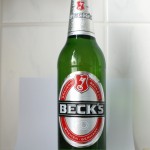 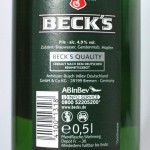 Test result: There is no indication of the presence of gluten. According to the instructions there should appear a clearly visible pink test spot on the left of the test area ( T ) to indicate the presence of gluten. But this test is negative. The pink spot on the right test area ( C ) is a control spot and indicates that the extract/sample is suitable, the test has been performed correctly and all reagents are active. Even though the detection limit in this kit is very low (1-2 ppm) and the test is negative please note this is not a medical advice – please see also my facts page. 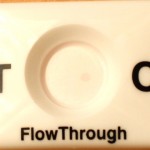 Poll: Which German beer do you want me to test next?