I had a request from Northern Ireland on a German beer which I didn’t know until then. It’s the Perlenbacher beer from the German discounter Lidl who is present all over the world I guess.

In German Lidl stores two variants of the Perlenbacher are available – one with 4.9 ABV and one with 5.2 (considered the “Export”). I tried both and couldn’t taste any difference, though. The Pils comes in a nice bottle with twist cap which is very unusual for Germany. Almost all the mainstream beers in Germany come with crown cork or flip-top. The Perlenbacher Export comes in a plastic bottle which is an insult to every beer lover.

For the gluten test I used the 4.9 ABV Pils. It is hoppy, bitter and has good carbonation. It tastes more like a typical Northern German bitter beer. It was OK to drink but not very quaffable. And here is the result of the gluten test. 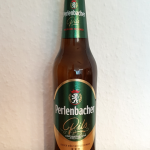 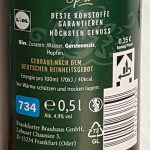 Test result: There is a very faint but visbile pink test spot on the left of the test area ( T ) which indicates the presence of gluten. According to the instructions a “very low gluten” level of 20 to 100 ppm should give a test spot which is weaker or similar in intensity to that of the control spot ( C ). As this spot is very faint the gluten level seems to be much below 20 ppm. 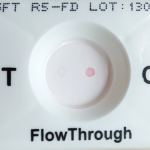 On a scale from 1 to 20 I would rate the test spot intensity 3. As Imutest uses the R5 antibody since a while it is difficult to estimate the gluten level in ppm in comparison to the Skerritt antibody they used earlier, hence I will mark the test just positive. Please find some more information here. Even though this test is positive please note it is not a medical advice – see my facts page.