Clear winner of the recent Asian beer poll was Tsingtao, a Chinese beer from one of the world’s largest breweries – founded by German settlers at the beginning of the 19th century. The taste is actually good – refreshing and crisp, not watery. It contains rice so my assumption was that it is rather gluten free but my test showed it is not: 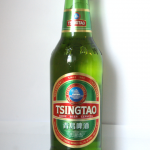 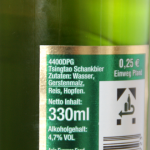 Test result: There is a clearly visible pink test spot on the left of the test area ( T ) which indicates the presence of gluten. According to the instructions a “very low gluten” level of 20 to 100 ppm should give a test spot which is weaker or similar in intensity to that of the control spot ( C ). Please find some more information here. The test spot appears slightly lighter than the control spot but almost identical. 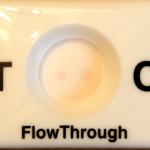 On a scale from 1 to 20 I would rate the test spot intensity 6 so in this test the level is above 20 ppm. Even though this test is positive please note it is not a medical advice – see my facts page.